The Best of British

Menu
GET A QUOTE 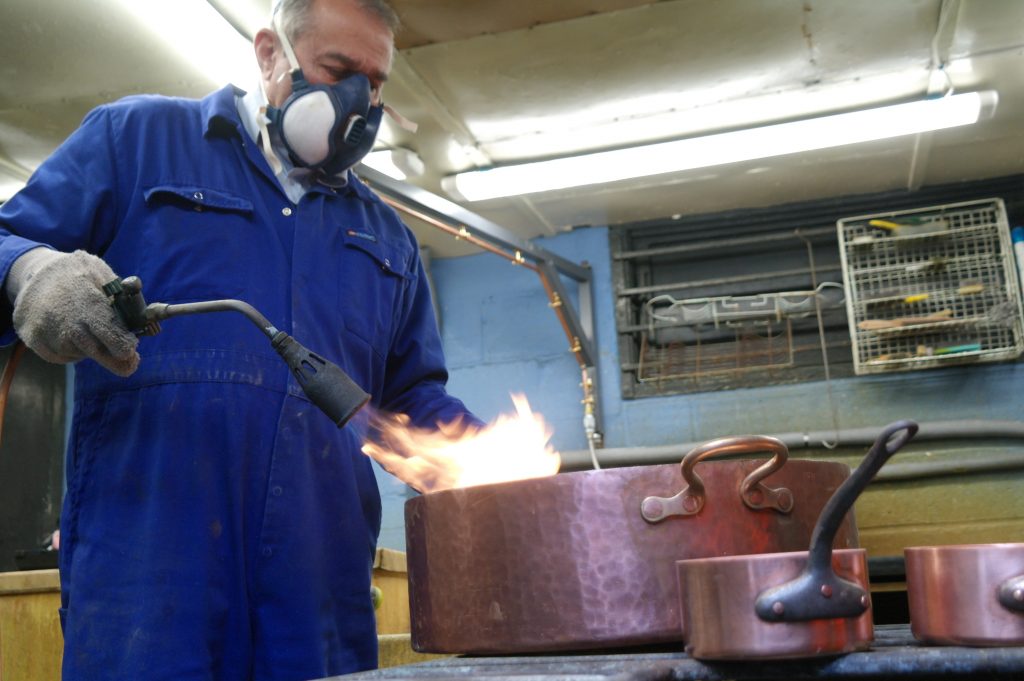 Her Majesty’s Tinsmith in Sturminster Marshall.

FEELING THE HEAT: Nick Stevenson who runs Sherwood Tinning based in Sturminster Marshall

ROUND the back of a nondescript industrial estate in distinctly un-regal Sturminster Marshall, Nick Stevenson goes about his work.

If you’ve never owned a copper cooking pan you may as well stop reading now because you probably won’t get it. But if you do, you will be scrabbling for his number as you read, for the simple reason that there aren’t many like him left. Indeed, his firm may be the only one left that re-tins pots and pans in the traditional, hand-wipe manner.

No electro-plating, dipping, or cheapo solutions here. Nick does it the old-fashioned way, with cleaning, re-shaping with a hammer and anvil, extreme heat and by hand, just as his father taught him. It’s the only way, he’d say.

“When I first started I looked at dipping and electro-plating and it is a very good method but it gives you such a thin layer, extremely thin, it’s meant for decorative stuff not serious cooking,” he says.

And as serious cooks all know: “There’s nothing to compare, cooking wise, with copper – any chef worth his salt will always try to use it,” he adds.

Why? “Copper is an excellent conductor of heat. It distributes it evenly which means the chances of you messing up something or burning it is virtually nil.”

But copper must be lined with tin and when that wears out it needs replacing. Nick has replaced the tin on some of Britain’s most illustrious pots and pans; the Athenaeum Club, Whites, the Berkeley Hotel, the Carlton Club, Garrick Club and the Belgian Embassy are all customers. But it was through another client, The Savoy Hotel, that Nick got his big break.

“The back of house manageress was a lovely lady and I’d done some pans for her but unbeknown to me she was great friends with a gentleman at Buckingham Palace and he’d asked if she knew of anyone who did tinning.”

This was how Nick found himself talking to a well-spoken chap who informed him he had ‘some pots and pans’ that needed looking at and would he be able to visit his address in central London?

Visitors to Britain’s most fabled address arrive at the side door and are subjected to a list of security questions.

“The manager came down and signed me in and after chatting for a while he asked if I’d like to meet the royal chef.”

At first, says Nick, the chef appeared quite stern.

“He asked me all about my tinning and I told him I was the third generation of my family doing this. Then he showed me some pots and pans and asked what I thought of the finish on them. I pointed out what I thought was wrong and then he asked me how I applied the tin.

“When I told him it was hand-wipe – where you melt the tin onto the surface and finish by hand – he knew exactly what I was talking about. His eyes lit up and he smiled and said; ‘My dear young man that was exactly what I wanted to hear’.”

Nick was then taken through the main kitchens to the store. “The kitchen is huge, massive; hundreds of pots and pans,” he says.

“I love copper, love working with it, and I have never seen so much in one place in my life.

“It took my breath away.”

After taking one pan to repair as a test he sent it back and for six months heard nothing until he received another call, saying they were delighted with his workmanship and could he provide a quote?

Since then Nick has worked on vast numbers of royal cookware from the royal kitchens and some of it very historic.

“The older pans were handmade for individual chefs and many are stamped with the date they were constructed,” he says. “The oldest royal pot I’ve ever tinned was dated 1736 and it must have been a foot across.”

Perhaps the most important item, however, was the sauté pan the chef asked him to re-tin as a ‘special job’.

“He told me the pan belonged to Prince Philip and that he often came into the kitchens.”

Despite all this, however, it took Nick five years – the minimum time necessary – to obtain the Royal Warrant which arrived in a tube in the post.

“I kept coming back from the workshop to get it out and look at it,” he said.

Since 2003, as a royal warrant holder, he has been privileged to meet the Queen and Prince Philip on several occasions.

“I can remember being introduced to them and Philip asked what I did. I told him; ‘We do the tinning for your kitchen, sir’ and he looked very interested and said: ‘Do you!’”

It’s a long way from the overalls, acid and water which are the daily elements of life at Sherwood but he can’t imagine doing anything else.

“When you know you’ve made a good repair and restoration of a pot or a pan, it’s a wonderful thing to see,” he says.